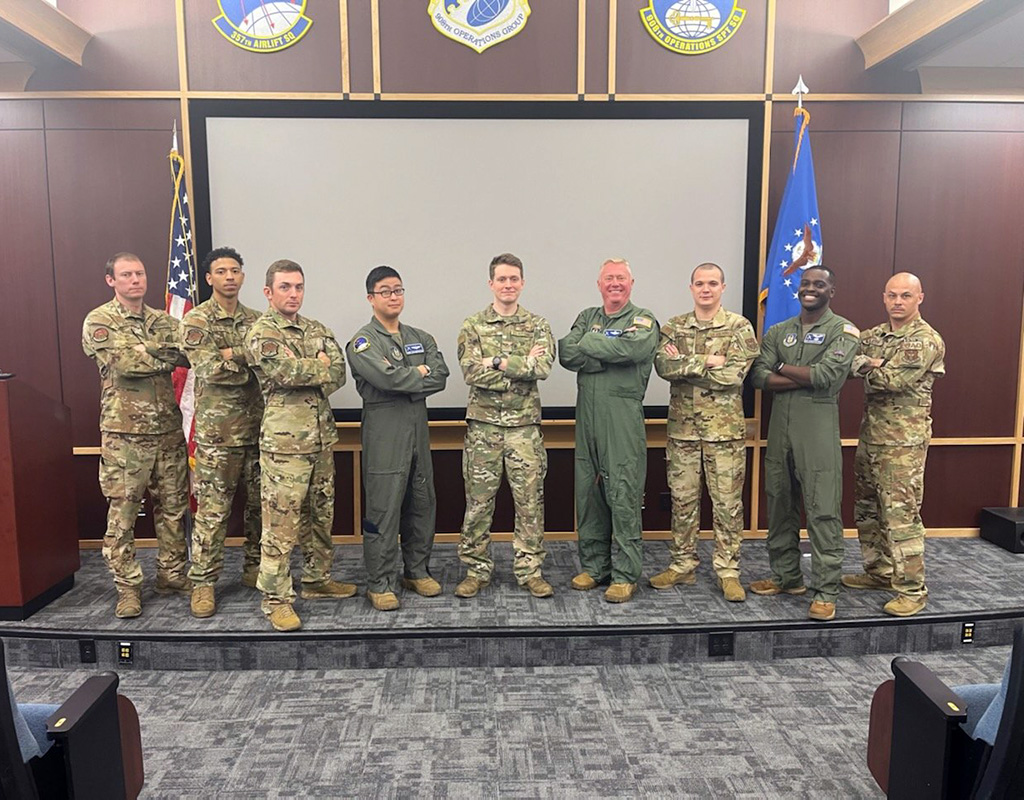 This was the first time that the BSMA course was taught by a mobile training team.

In some ways, the instructors were more comfortable teaching at their home station, but their experience and expertise helped make the training at Maxwell Air Force Base successful.

“We planned for potential short falls ahead of time,” explained Bourne. “Some items we work with or teach with had to be left behind as they are just too large and weigh too much to travel with, but we were able to still be effective instructors by identifying those issues and coming up with other items to use in place of those training tools or examples we couldn’t bring.”

The purpose of the course was to convert C-130 flight engineers and loadmasters to special mission aviators in preparation for the wing’s anticipated remission from a C-130 tactical airlift unit to the new MH-139A Grey Wolf helicopter formal training unit.

The fact that all of the 908th members attending this course were seasoned aircrew made it a little bit easier for all involved.

“Their experience was very beneficial,” said Bourne. “They already have a good foundation of things and knew the fundamentals, which in turn made the course easier to teach.”

Even with that solid foundation, the course was still needed to ensure future mission success.

Master Sgt. James Emanuel, a former loadmaster who was in the course, equated the course to a pendulum, explaining it by saying, “The course helps bridge the gap we have from our experience in a C-130 by swinging from that experience back to the foundational knowledge of aviation and then focusing on rotary-wing as opposed to fixed-wing.”

Since the 908th AW is preparing for a remission, it became a vital priority to get as many members trained and ready for the new mission as soon as possible. That’s when the 908th AW began coordinating with the Career Enlisted Aviator Center of Excellence to create a plan of attack.

“We tried to find a solution to our members needing the training, and the ability to get that training for as many of our members as possible in such a short time,” said Emanuel. “We worked as a team with the Center of Excellence to find the best way forward.”

“This is the first BSMA MTT, but not the first MTT the Enlisted Aircrew Center of Excellence has executed,” explained Chief Master Sgt. Gregory Gibbs, senior enlisted leader of the 344th Training Squadron, the parent organization for the Career Enlisted Aviator Center of Excellence. “Providing quality training and education, and enhancing the Air Force’s lethality and readiness is our top priority, so we do offer MTT options to accommodate large groups on tight timelines. For this specific course, sending two TDY instructors versus bringing a large group of trainees not only saved money, but it was also the only way our team could support AFRC’s training request within their tight window.”

Fiscal responsibility, instructor availability, and timing all play a factor in deciding if a MTT is possible.

“We send MTTs out semi-regularly, specifically in situations like this when a flying organization converts airframes or mission sets and requires a group of members retrained,” said Chief Master Sgt. Timothy Barker, deputy commandant, Career Enlisted Aviator Center of Excellence. “We’ve sent MTTs several times to support AFRC and ANG units. In situations where a large number of people require training, it’s absolutely more fiscally responsible to send a few instructors than bring an entire unit to JBSA-Lackland. The primary limiting factor on whether the Center of Excellence can support an MTT is whether we have instructor availability or not. Depending on how many programmed classes we already have in house, we cannot always generate a team within the requesting unit’s timeline. This BSMA MTT fit within a window where we had instructor availability, and sending the MTT allowed us to train the entire team within AFRC’s tight timeline.”

There were some additional benefits to the 908th AW having the course taught at Maxwell.

“We have our support agencies here, which are people and organizations that we are familiar with if we needed any assistance as opposed to being in an unfamiliar location,” explained Senior Master Sgt. Justin Nettles, a former loadmaster who was in the course. Emanual echoed Nettles sentiment, while adding, “It allowed us to still preserve a continuity of operations and the ability to work on other tasks and duties we have to accomplish.”

The eight students who attended the course not only represent a first for the Career Enlisted Aviator Center of Excellence as the first BSMA taught away from Lackland, but they also represent another milestone for the 908th AW in the mission change from the C-130 to MH-139A Grey Wolf.

This press release was prepared and distributed by the 908th Airlift Wing.