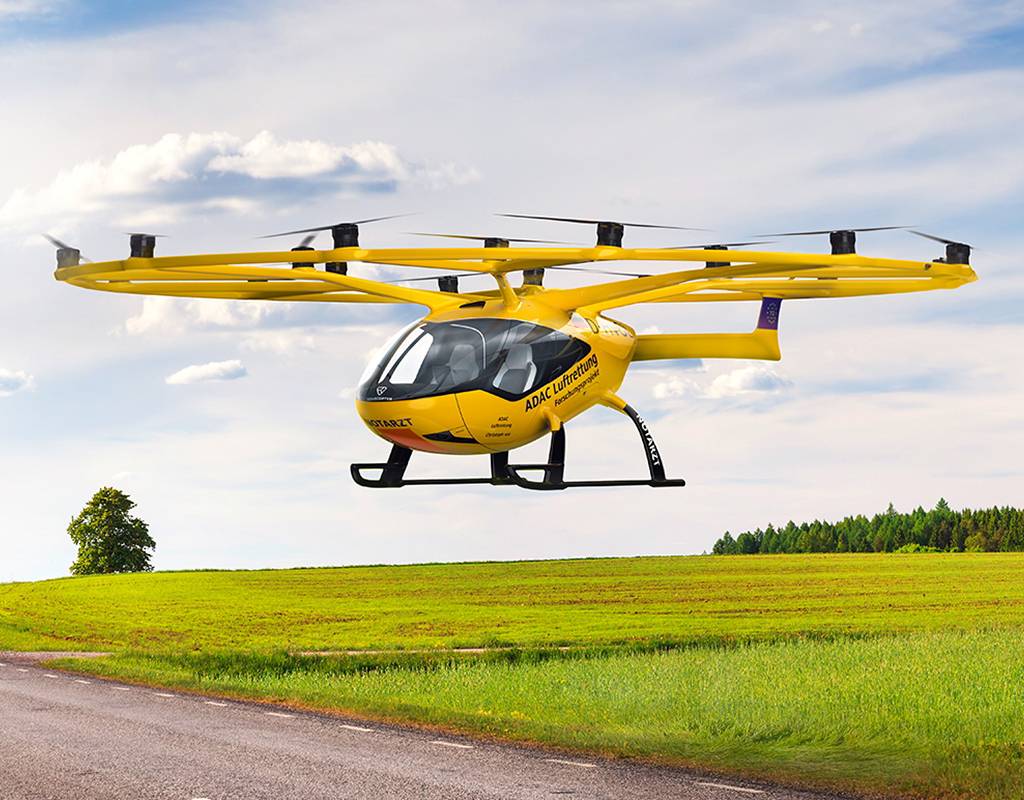 With numerous electric vertical take-off and landing (eVTOL) developers pursuing emergency medical services as a potential market and ideal early use case, German air medical operator ADAC Luftrettung on Oct. 14 published the results of an 18-month study with Volocopter and other partners on the application of multicopter aircraft to the sector.

The study indeed found potential for multicopters to improve resource management and response times, particularly in rural areas. There are numerous caveats, however: To fully realize the benefits of introducing a new transportation option into the system requires aircraft with much greater range, speed and payload than Volocopter’s VoloCity, which was used for the study and the company expects to bring to market in the next two to three years.

Authors of the 130-page report, Multicopter in the rescue service, focused exclusively on the capabilities likely to be available in the next two to four years, ruling out any autonomous aircraft and patient transport services. The former is seen as of little relevance to air medical operations, which are complex and unpredictable in nature, but the latter defines how eVTOLs will and won’t disrupt existing emergency medical activities.

The total amount of time that passes between an emergency call and arrival at a hospital is a critical figure in patient outcomes, but so is the initial response time, or time until medical professionals first arrive on the scene. In Germany, the nationwide average initial response time has deteriorated by almost 40 percent in the past 20 years — largely the result of significant resource constraints in sparsely-populated rural regions.

Germany, along with many other European nations, employs a robust network of non-transporting EMS ground vehicles — known as NEFs — used to quickly move an emergency physician and/or paramedic and their equipment to the scene of an incident. With helicopters seen as a “last resort” due to their limited availability and high operating cost, NEFs, heavily impacted by longer journeys in rural areas, are primarily responsible for worsening response times.

“In order to be able to use multicopters as system-relevant resources in the rescue service, further technical developments are necessary. In particular, a sufficient range, airspeed, payload capacity and availability must be technically guaranteed. . . . For a nationwide operation of multicopter air rescue systems, model variants with alternative or improved energy storage or energy conversion systems as well as higher payloads and cruising speeds are required,” the report highlights, adding that the aircraft must be able to operate 24 hours a day as well as in bad weather.

Adding multicopters to the emergency response system will introduce problems as well as solutions, too. If an emergency doctor may be able to arrive at a scene early or even first due to a multicopter, that necessitates special medical equipment usually transported in an NEF, according to the report, which will need to be redesigned and optimized for the lower payload capacity of a multicopter.

Despite these concerns, the study concluded significant potential benefits for emergency medical response and found little evidence of social or economic barriers to implementation. Its authors expect the population to be supportive of multicopter use for medical purposes and estimate the annual cost of a 24-hour multicopter station at around €1.35 million (US$1.59 million) — more expensive than an NEF unit, but cost-efficient when a larger response area of 25-30 km (15.5-18.6 miles) is considered. That figure includes an estimate of multicopter operating cost released by Porsche Consulting in 2018at one-tenth that of a helicopter.

“The work of the project participants is very impressive. Today we are convinced that multicopters can help shape and improve future rescue services. The results are so promising that will pursue operational testing of the project,” said Frédéric Bruder, managing director of the non-profit ADAC Luftrettung.

In the years to come, Volocopter will conduct technical flights to assess a piloted VoloCity’s ability to take-off and land on slopes, in poor visibility, at night, and in winter, in partnership with the German Aerospace Center. In 2023, a pilot program will be launched using the VoloCity as a minimum viable product in the test regions of Idar-Oberstein and Ansbach, two cities with a combined population of about 70,000.

After that, service rollout is expected beginning in 2025, with ADAC Luftrettung taking the position that initial operations should require a commercial helicopter pilot’s license including a type rating in multicopter aircraft.

Numerous other eVTOL companies — Dufour Aerospace, EHang, and Jump Aero to name a few — are pursuing medical response as a secondary or primary application of their aircraft, with different ideas of how the technology could best integrate with or replace existing transport options.

The ADAC Luftrettung report, offering a wealth of information to support the use of multicopters in particular for a specific application — transporting medical professionals to the scene of an incident in rural regions — may help clarify the use case for eVTOLs in emergency medical services and quell concerns they will compete with helicopters, at least initially.