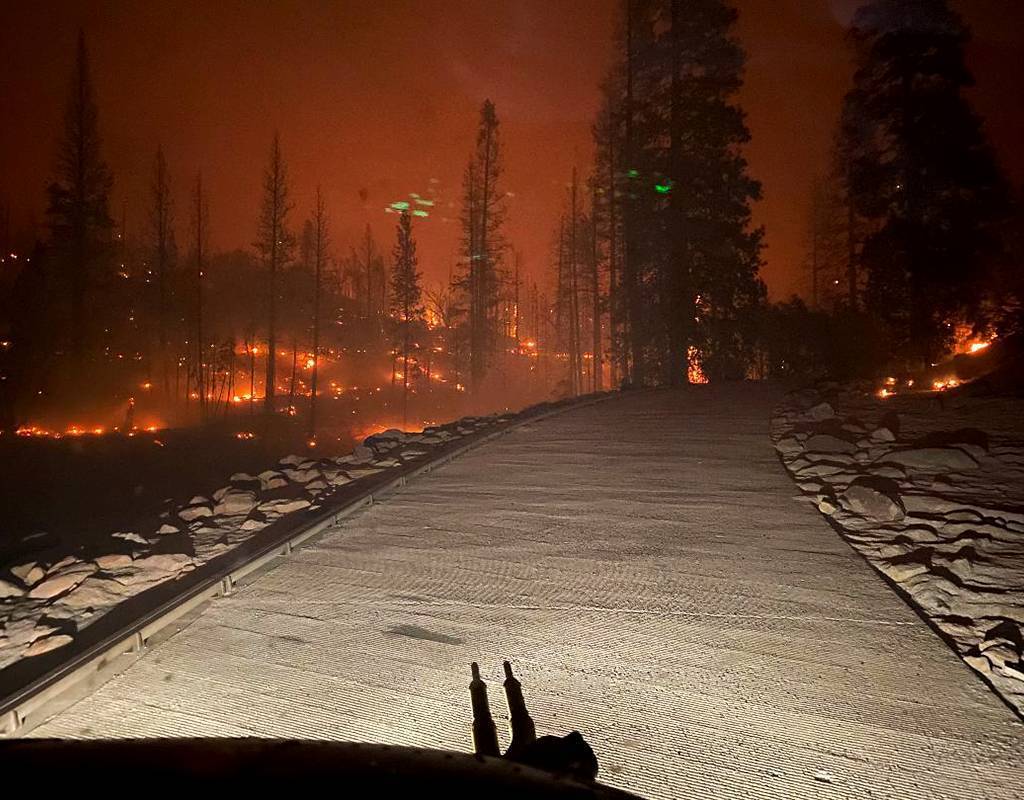 The helicopter rescues that saved hundreds of people trapped by the fast-moving Creek Fire in California taxed aircraft and crews to their limits as they contended with darkness, smoke, and passenger loads well beyond what they would normally carry.

That’s according to crewmembers who spoke to Vertical about the harrowing missions, most of which took place over Labor Day weekend and into the morning of Sept. 8. Campers and backpackers who were enjoying the holiday at Mammoth Pool Reservoir and elsewhere in the Sierra National Forest had to be airlifted to safety when the Creek Fire cut off other means of escape.

California National Guard (CNG) CH-47F pilot CW5 Joe Rosamond recalled that he was at home with his family, not on standby, when the call for help came in around 3:45 p.m. on Saturday, Sept. 5. He and the other members of his crew — including pilot CW2 Brady Hlebain, and flight engineers Sgt. Cameron Powell and Sgt. George Esquivel — reported to the 40th Combat Aviation Brigade (CAB) facility in Stockton and were off the ground in their Chinook by around 6:30 p.m.

“We flew directly to the area at sunset and had to devise a plan to get into the lake area,” Rosamond told Vertical. With air attack departing the incident at nightfall, the crew was coordinating directly with the Creek Fire’s operations personnel on the ground. “They advised us that it was too smoky to get in, but we told them we had to try. We felt it was safe since all other aircraft from Cal Fire had [returned to base].”

The Chinook was joined by a 40th CAB UH-60M Black Hawk from Fresno crewed by pilots CW5 Kipp Goding and CW2 Irvin Hernandez, along with crew chief WO1 Ge Xiong. Once it got dark enough, the crews donned their night vision goggles and found that embers from the fire provided sufficient terrain illumination for them to attempt the flight. Rosamond noted, however, that wires were a concern, as “it was almost impossible to see wires and towers with the backlighting and low contrast.”

The crews decided to fly northbound up the San Joaquin River that leads to the Mammoth Pool Dam. Halfway to the destination, the Black Hawk had to turn around after losing visual contact with the Chinook. But Rosamond’s crew was able to make it to the lake, where they opted to land on a 13-degree upslope boat launch.

Sixty-five passengers were loaded into the back of the Chinook for the first evacuation. “The first lift had many injured — ranging from full body burns to broken legs and ribs. These people would not have made it through the night,” Rosamond said.

Although the landing zone was at the relatively moderate elevation of 3,300 feet, its proximity to the fire meant that the outside temperature was over 105 F (41 C). That challenged the Chinook’s performance, particularly on the second lift, when an even larger passenger load forced the crew to operate near maximum power. As Rosamond observed, “Flying the CH-47 is a blessing since we don’t have to normally worry about power and we can effect missions like this in a way that turns small tasks into large gains. This time, however, we absolutely used the aircraft at its maximum and it pulled through.”

In all, the Chinook evacuated 203 people across three airlifts. Rosamond praised the crews of both aircraft for the commitment they showed that night. “Each person knew the situation and knew the hazards. They accepted the risk and called to continue on, even though I’m sure they were beyond anything they have ever seen. It is a testament to the professionalism of the crew, the training, and the support we have,” he said.

“Our Army National Guard pilots and their crews are true heroes for risking their lives to save hundreds from the flames of the Creek Fire after being directed in by Cal Fire operations experts,” said Maj. Gen. David S. Baldwin, Adjutant General for the California National Guard. He also highlighted contributions by the Air National Guard’s 144th Fighter Wing’s fire department, homeland defense force and medical support group, which teamed up with the Army’s 1106th Theater Aviation Sustainment Maintenance Group to receive evacuees at Fresno Airport until first responders arrived.

“This was all done in close coordination with Cal Fire, Fresno Fire and Fresno Sheriff’s Departments, and civilian medical services,” Baldwin noted. “It was a very, very well coordinated interagency response on the fly.”

Evacuations related to the Creek Fire continued over the next several days. In another major operation, a California National Guard Chinook and Black Hawk and a U.S. Navy MH-60S Seahawk helicopter from Naval Air Station Lemoore Search-and-Rescue were used to help evacuate 142 people from the area of Edison Lake, Mono Hot Springs, and Florence Lake over the night of Monday, Sept. 7 and into the morning of Sept. 8.

Lt. Joshua Tassone, the co-pilot of the Seahawk, recalled that his crew was closely following news of the Creek Fire as Labor Day weekend progressed. “On Monday evening at approximately [8 p.m.], our crew discovered through a published news article that the two CNG aircraft had made an unsuccessful attempt at rescuing over 150 stranded persons spread across four separate locations,” he recalled. “We contacted a Cal OES [the California Governor’s Office of Emergency Services] representative and communicated that we had a crew ready to launch and standing by in support of any rescue operations should the CNG request it.”

Cal OES passed along the message, and within 15 minutes Tassone and the other members of his crew — aircraft commander Lt. Brandon Tinkham, Chief Naval Aircrewman Jesse Peterson, and Hospital Corpsman First Class Tyler Hodge — were en route to Fresno Airport for a briefing with the CNG crews.

The Lemoore SAR crew was initially tasked with evacuating a family of five at Hidden Lake, about three miles west of Florence Lake, while the Chinook and Black Hawk were assigned to missions at China Peak and Edison Lake. All three aircraft launched at around 10:45 p.m., but soon encountered reduced visibility due to thick smoke and falling ash.

“Over Black Rock Reservoir, our visibility dropped below a level where continued flight was no longer possible,” Tassone recalled. “We immediately executed a course reversal and strained to maintain reference on terrain. As a crew, we executed an intense scan of terrain and flight instruments to ensure we safely navigated the aircraft and maintained spatial orientation, avoiding life-threatening vertigo in a severely degraded environment.”

Back at Fresno Airport, they regrouped with the California National Guard crews, who had also been unsuccessful in their rescue attempts. The crews decided to wait until 2 a.m., when a low-pressure system was forecasted to move in from the east, hopefully pushing out some of the smoke. Once personnel at Edison Lake reported that they could see stars through the smoke, the crews decided to try a new approach, this time coming in above the smoke layer before determining whether they could safely descend.

At around 2:15 a.m., the Chinook and Black Hawk departed on what would be their final rescue attempts due to reaching crew day limits. Soon after their departure, the crews radioed back that the top of the smoke layer was at roughly 11,000 feet. The Chinook crew was able to make out Hidden Lake and headed in to rescue the family of five, while the Black Hawk proceeded to China Lake to evacuate 14 people stranded there. The Seahawk launched around 2:45 a.m., climbed above the smoke layer, and proceeded directly to Edison Lake, where most of the evacuees were concentrated.

Arriving on location around 3:20 a.m., the Seahawk crew was initially unable to make out the lake due to the thick smoke layer. “We utilized a ridgeline that was visible just above the smoke to funnel us into the lake,” said Tassone. “Keeping the terrain close, we descended roughly 3,500 feet through thick smoke and ash and began to break out the lake at roughly 200 feet [above ground level].” Although law enforcement personnel had illuminated a proposed landing zone with their vehicle headlights, the crew determined it was unsuitable due to unfavorable winds and the potential for brown-out. Instead, the crew chose to land on a boat ramp closer to the dam, where blowing dust was minimal.

Their first evacuees were 11 Pacific Crest Trail hikers who had been off the grid and didn’t understand why they were being evacuated. According to Peterson, even in subsequent runs, most evacuees “had no clue as to just how big and dangerous the Creek Fire had grown over the previous 48 hours, and also didn’t know that they were trapped behind the fire line with no means of escape as all the roads had been overrun by fire. Many of them expressed emotions, crying, not knowing what was going to happen next.”

The Lemoore SAR crew made two more lifts that night, carrying 17 passengers and one dog on the second lift, and 16 passengers and three dogs on the third. “We packed them in like sardines!” Peterson said, noting that they made an extra effort to accommodate personal belongings, too. “That was important to us because for some of the locals, what was in those bags was the only thing that they might have left.”

As of Sept. 11, the Creek Fire had burned more than 175,000 acres and destroyed more than 360 structures, and was only six percent contained. However, no fatalities had been attributed to the blaze — a testament to the heroic work by crews both on the ground and in the air.