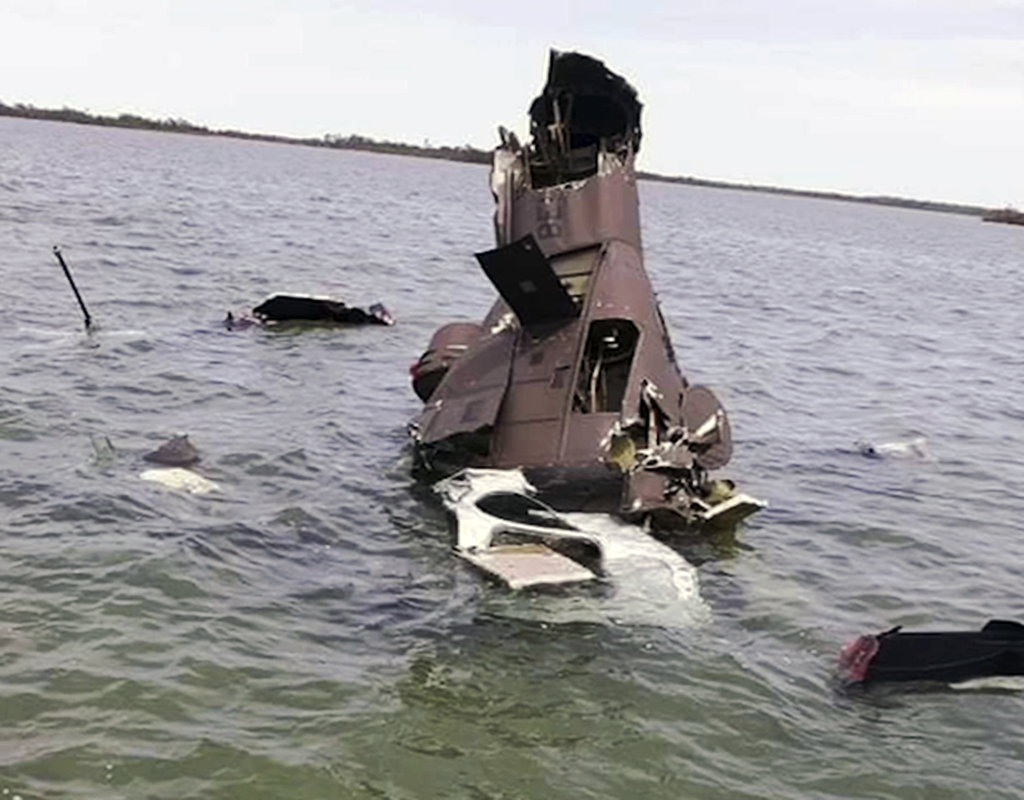 Preliminary reports released by the Belize Ministry of National Security on March 18 indicate that meteorological conditions, human factors, and a lack of operational flight crew experience were contributing factors to the Feb. 27, 2020, crash of a Belize Defence Force (BDF) Bell UH-1H Huey.

The helicopter, marked with “BDF 12,” departed Williamson Hangar Complex with clear visibility at approximately 4:07 a.m. local time on Feb. 27 to assist with a counter-narcotic mission at a clandestine airstrip near Western Lagoon in Belize.

The aircraft reportedly hovered near the airstrip for a short time, and was believed to have departed the area, subsequently flying directly over the lagoon. The aircraft made a sharp right turn at very low altitude over the unlit body of water and crashed into the lagoon at a high-impact angle while still powered, according to the Belize Civil Aviation Department’s report. All four persons on board — two BDF Air Wing pilots and two engineers — were killed in the crash due to blunt force.

In the moments after the helicopter first took off, a Gulfstream II business jet loaded with 69 bales of cocaine touched down on the airstrip near the lagoon. A neighboring country’s counter-narcotics air asset was tracking the plane as it moved toward Belize airspace. Authorities used actionable intelligence to determine where the plane had landed, and were able to swarm the area.

Photos of the crash site showed the helicopter resting almost vertically in water that was approximately five feet deep.

A review of the meteorological conditions at the time of the accident showed that weather was a contributing factor to the crash, though it was not the primary cause. In the early morning hours of Feb. 27, a strong cold front crossed the country, producing periods of rain and thunderstorms with low ceilings of 500 to 1,000 feet — which reportedly decreased at times to as low as 300 feet in the area of the crash. Visibility was low, and wind gusts of 25 to 30 knots produced strong turbulence in the area.

After reviewing the aircraft remains such as the instrument scar marks, among other recovered evidence, the investigative team determined that human factors — more specifically, spatial disorientation — was the major contributing factor to the accident. It was suspected that the flight crew’s spatial disorientation occurred while transitioning from straight, level flight into performing a maneuver (right turn). While the crew was flying at low altitude in instrument meteorological conditions at night and over a body of water with gusty winds, the report indicates that the crew was unable to recognize the onset of spatial disorientation and had little time to react appropriately using the flight controls.

According to the Honduran investigative team that assisted the Belize Civil Aviation Department in the accident investigation, the flight crew had a limited number of hours on the Huey — the pilot-in-command had accumulated 512.5 hours, and the co-pilot had clocked 162.4 hours.

The aircraft itself had just under 3,980 flight hours, and its Honeywell T53-L-13 engine had a time of 375.1 hours. Bell, which is the manufacturer of the UH-1H aircraft, also took part in the accident investigation, and stated in its own report that no pre-accident airframe abnormalities were found. Bell’s report also states that Honeywell is assisting in the engine portion of the investigation. However, the investigation found that indicators related to the helicopter’s main rotor, tail rotor, and transmissions showed no signs of engine failure.

A final report of the accident is expected to be published following the completion of tests with the aircraft’s engine, and once any additional evidence is gathered.