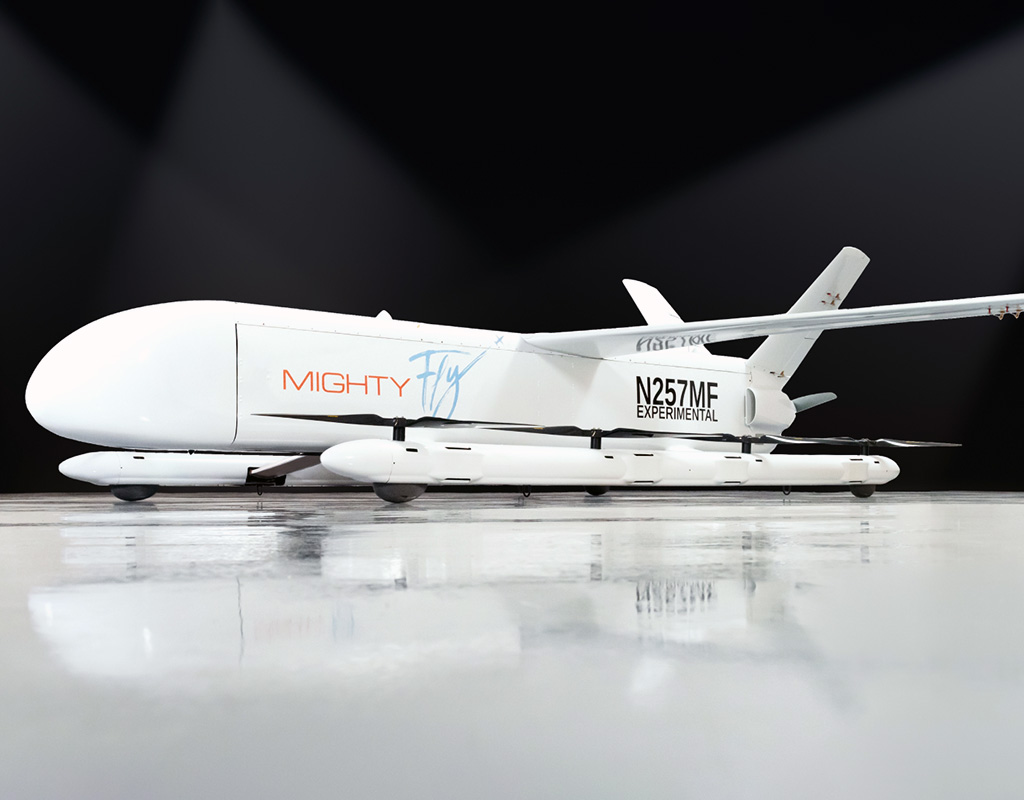 Just 21 months after receiving $5.1 million in seed funding and with only nine months from concept to first flight, MightyFly is ready to unveil the next-generation of its aircraft, the MightyFly Cento.

It measures 13.1 ft. by 16.7 ft. (4 m by 5 m) taking up a total area that is less than two compact cars — meaning the ground transfer stations required onsite can simply be two car spots in an existing parking lot.

Cento is equipped with a 6 ft. by 1 ft. by 1 ft. (1.8 m by 0.30 m by 0.30 m) internal cargo bay able to carry 96 small USPS packages. Cargo is loaded and unloaded by a conveyor belt that operates autonomously, so no human handling other than drop-off and pick-up is required at the ground stations.

The aircraft are operated and maintained by MightyFly, which will manage the end-to-end process of its express shipping services making the customer experience convenient and seamless. Because Cento is equipped with a hybrid powertrain, it does not require recharging between flights. An internal combustion engine recharges the aircraft’s battery while in the air, enabling it to perform multiple consecutive deliveries, with up to a 600-mile range.

“The traditional hub-and-spoke distribution model can still serve businesses that have centralized warehousing and shipping systems in place and that have experienced few logistics issues,” said Manal Habib, MightyFly CEO and co-founder. “But if there is one lesson we’ve learned from supply chain bottlenecks and logistics over the past few years, it’s that we need flexibility — to be able to adapt to various cargo volumes and expedited timing or urgencies. Medical companies, just-in-time manufacturing, and the 51% of all retailers that now provide same-day delivery need a faster and more affordable way to get their goods and perishables to the final destination.”

After undergoing an extensive study of all safety standards and testing results of MightyFly’s end-to-end system, inclusive of aircraft hardware, software and its ground infrastructure, the Federal Aviation Administration (FAA) has granted the MightyFly Cento a special airworthiness certificate and a certificate of authorization (COA) for long-range flights.

This means that MightyFly can start demonstrating the long-range flight capabilities of Cento. Demonstrating autonomous eVTOL flights up to 600 mi of range with 100 lb of cargo is unprecedented in the industry.

With this COA in place, the company will be able to accelerate development of its autonomous aircraft, with a larger airspace (230 sq. mi) in which to test the transition from hover to forward flight at medium and high altitudes (up to 5,000 ft.).

h the potential to benefit the Department of Defense (DoD), such as delivery of medical supplies to a team in the field or other missions like communication relays where long-range capacity is critical. The U.S. Air Force has recognized the agility of MightyFly’s platform (e.g., no required ground charging infrastructure and long-range capability, both afforded by its hybrid propulsion) and is supporting further development of its technology.

MightyFly began autonomous flight testing of the Cento in December 2022. Meanwhile, it is planning to develop a larger vehicle that can carry 500 lb of cargo.

This press release was prepared and distributed by MightyFly.