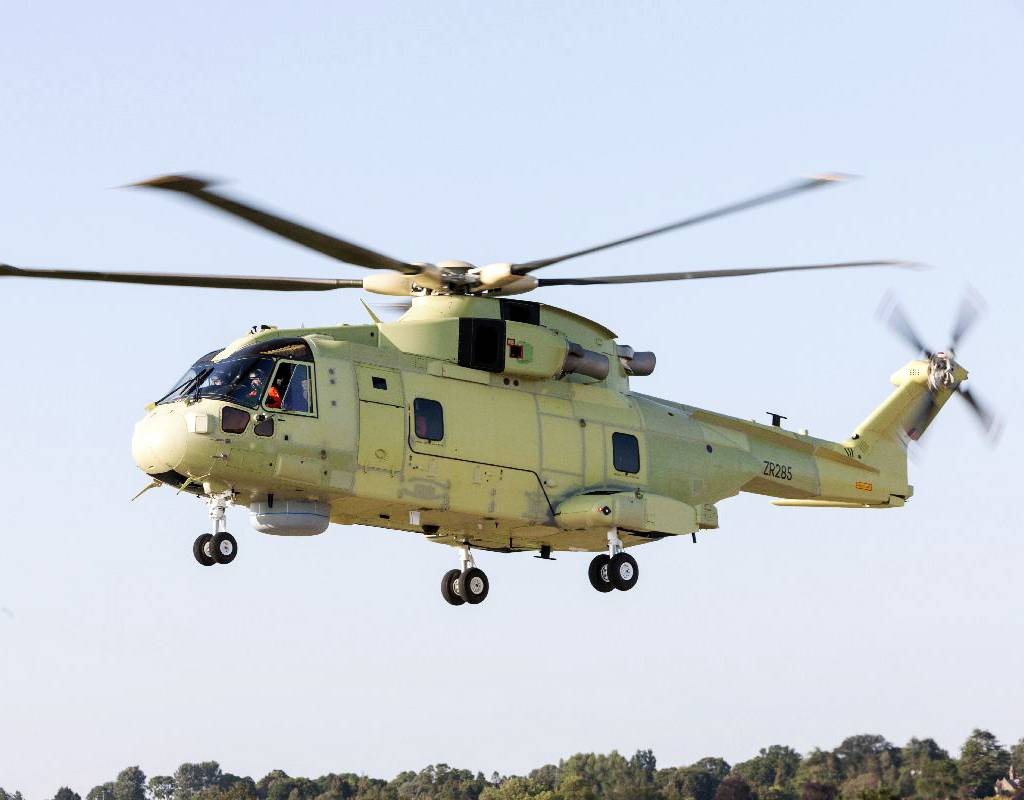 Leonardo is pleased to announce that the Polish Navy’s first AW101 (ZR285) achieved its first flight Jul. 19 at the company’s site in Yeovil. The flight demonstrated functional checks of the main airframe systems as well as the control system, and engine-handling checks were taken throughout to monitor the speed range of the aircraft. The flight envelope will now be opened further with testing exploring the bespoke mission equipment fitted to the aircraft.

This achievement is indicative of an integrated Leonardo team spanning the United Kingdom, Poland, and Italy. It highlights the strength in collaboration between Leonardo and the Company’s main industrial presence in Poland, PZL-Świdnik which acts as the prime contractor, as all teams work closely across the three nations to ensure this high-end capability for the Polish Ministry of National Defence.

In April 2019, the company announced it would supply four AW101s and a comprehensive integrated logistics and training package to the Polish Ministry of National Defence. The aircraft will significantly enhance the Polish Navy’s helicopter capability.

PZL-Świdnik, acts as the prime contractor and is responsible for the entire contract execution, and at Leonardo in Yeovil, the team assembles the aircraft. The AW101 will perform a range of missions for the Polish Navy including Anti-Submarine Warfare (ASW) and Combat Search and Rescue (CSAR).

In addition, there will be a searchlight and arrayed lights, which will ensure good visibility in all-weather conditions. The aircraft will be optimized with medical and rescue equipment, including two winches and a system for carrying loads on the external suspension. In addition, the AW101 fleet will be equipped with an emergency float system, life rafts, and a cold climate survival kit.

“This was the first flight of the new AW101 ASW aircraft built here in Yeovil for the Polish military. The flight represents not only the culmination of the design and production processes but also the start of the thorough testing phase of the aircraft’s development. It is expected that there will be a total of 700 hours of flight testing across the four airframes which will confirm the correct function of each aircraft as well as develop and validate a broad range of mission and customer specific changes from the standard AW101,” commented Miles Barnett, senior test pilot at Leonardo Helicopters (UK).

Designed with sophisticated avionics and mission systems, coupled with long range and endurance, thanks to its ability to use two out of three engines for cruise flights, the AW101 helicopter provides operational persistence for all missions. This mission flexibility makes the AW101 the most advanced, versatile and capable multi-role helicopter available today. The helicopter is already in service in some of the most important NATO nations, such as Italy, the UK, Canada, Denmark, Norway, and Portugal.

“This first flight of the Polish AW101 is testament to the exceptional Leonardo teams that span Europe, from Poland, the UK, to Italy,” said  Gian Piero Cutillo, managing director of Leonardo Helicopters. “This collaboration has meant we can ensure the customer receives high-end capabilities to meet the Polish MoD’s operational missions and national defense requirements.”

This story was prepared and distributed by Leonardo.