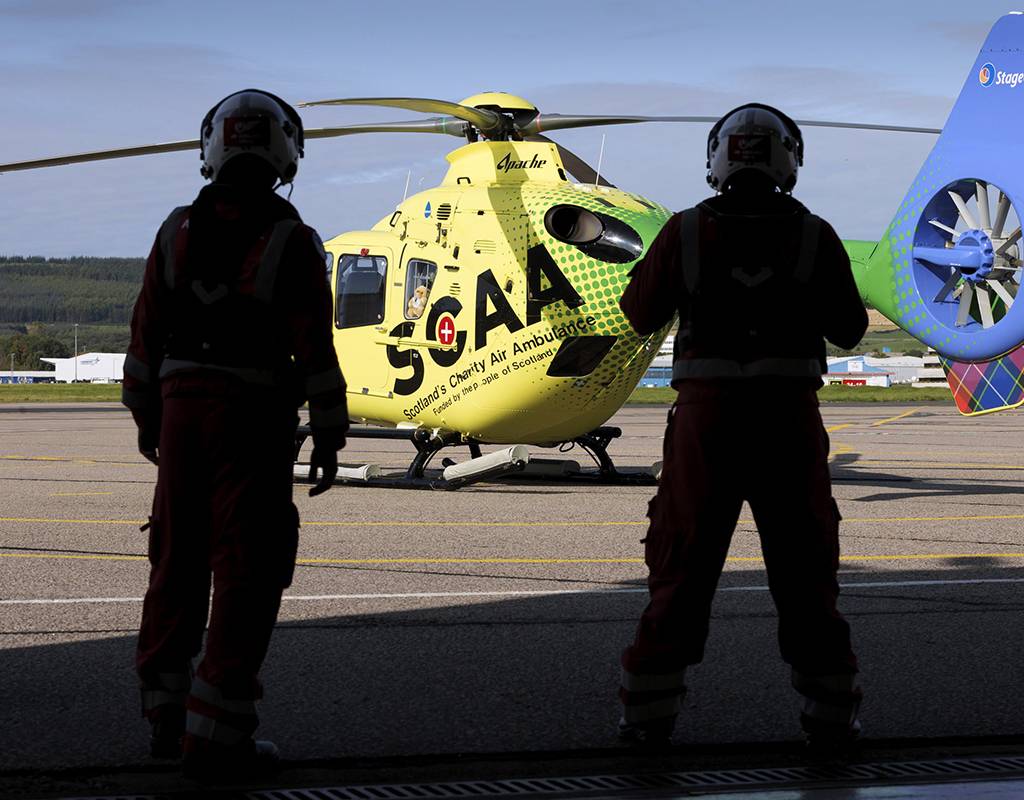 Scotland’s Charity Air Ambulance (SCAA) has recorded its busiest year ever as the country emerged from lockdown with an increased demand for the lifesaving service.

Emergency call outs soared well beyond pre-pandemic levels with crews at the charity’s Aberdeen and Perth airbases deployed 810 times during 2021 – a 76% increase on the previous year’s workload.

These deployments saw a record number of seriously ill or injured patients flown rapidly to advanced hospital care from every part of the Scottish mainland and many of its islands.

A total of 333 people were airlifted by SCAA (+140) with nearly three quarters being flown to the country’s four major trauma centers at Aberdeen, Glasgow, Dundee and Edinburgh.

Traumatic injury cases continued to dominate SCAA’s mission log in 2021, showing a 49% increase and accounting for around 40% (323) of the year’s call outs. Of these, the greatest number (135) were to road traffic collisions which accounted for nearly 42% of all trauma emergencies and 17% of the year’s total deployments.

Throughout the year, SCAA’s helicopters airlifted advanced medical teams directly to the scene of 111 emergencies, delivering critical care as quickly as possible to those most in need.

Crews were also quickly on scene for those taking seriously ill including cardiac related emergencies (136) and strokes (22).

A total of 160 missions involved air transfers from remote or island locations to advanced mainland hospital care where hours were saved on journey times for vulnerable patients.

In addition to airlifting patients to hospital, SCAA’s paramedics were at hand to treat and assist in cases ranging from major multi-casualty trauma incidents to single patient illnesses.

SCAA impacted on the outcomes for both sick and injured from the islands of The Hebrides and Orkneys to Aberdeenshire and The Borders.

The majority of emergencies attended by the charity’s distinctive air ambulance helicopters were in Highland (27%), Grampian (24%) and Tayside (19%) health board areas.

Patients helped by SCAA ranged from babies to the elderly, with the majority being adults aged 18-64 (55%) and 34% involving patients aged over 65.

SCAA’s 2021 mission log shows that the emergency response helicopters’ busiest month was July, while Thursdays saw the greatest demand for the charity service.

Throughout 2021, SCAA airlifted patients to hospitals throughout the country. More than 15 different hospitals from Orkney to Newcastle were visited by SCAA to hand over seriously sick and injured patients.

Responding by both land as well as air, SCAA paramedics attended 219 emergencies in their Rapid Response Vehicles – 27% of the year’s call outs.

The charity, funded entirely by public donations, is now in its ninth year of operation. The latest statistics reflect the growing demand for SCAA’s rapid response to time-critical emergencies, delivering pre-hospital care across the whole of Scotland and its island communities.

Reflecting on the year’s operations, SCAA chief executive David Craig said the demand for pre-hospital emergency care had never been greater and the charity-funded helicopter air ambulances and dedicated crews fulfilled a vital role in meeting that need.

“We expected to become increasingly busy as the country returned to some semblance of normality following lockdown,” he said, “but the demands on our two helicopters and rapid response vehicles have been considerable throughout 2021.

“The fact that three quarters of our airlifted patients were flown to one of the country’s four major trauma centers shows the high-acuity trauma our crews are dealing with,” added David. “Deploying with a specialist doctor-led team on 111 occasions has allowed us to deliver advanced critical care straight to the accident or emergency scene.

“SCAA’s speed and level of care have proven to be life-saving and our crews’ impressive work – during another challenging year – has seen us delivering more emergency care than ever before which reflects the demand for our service.”

David also thanked the fundraising public who ensured SCAA was online 12 hours a day, 365 days of the year, at both Aberdeen and Perth bases throughout 2021.

“It’s been a trying year for everyone,” he said “but our amazing supporters kept the charity in their hearts throughout, with their ongoing generosity enabling SCAA to take more care, more quickly to more people throughout the whole of Scotland than ever before.”

This press release was prepared and distributed by Scotland’s Charity Air Ambulance.