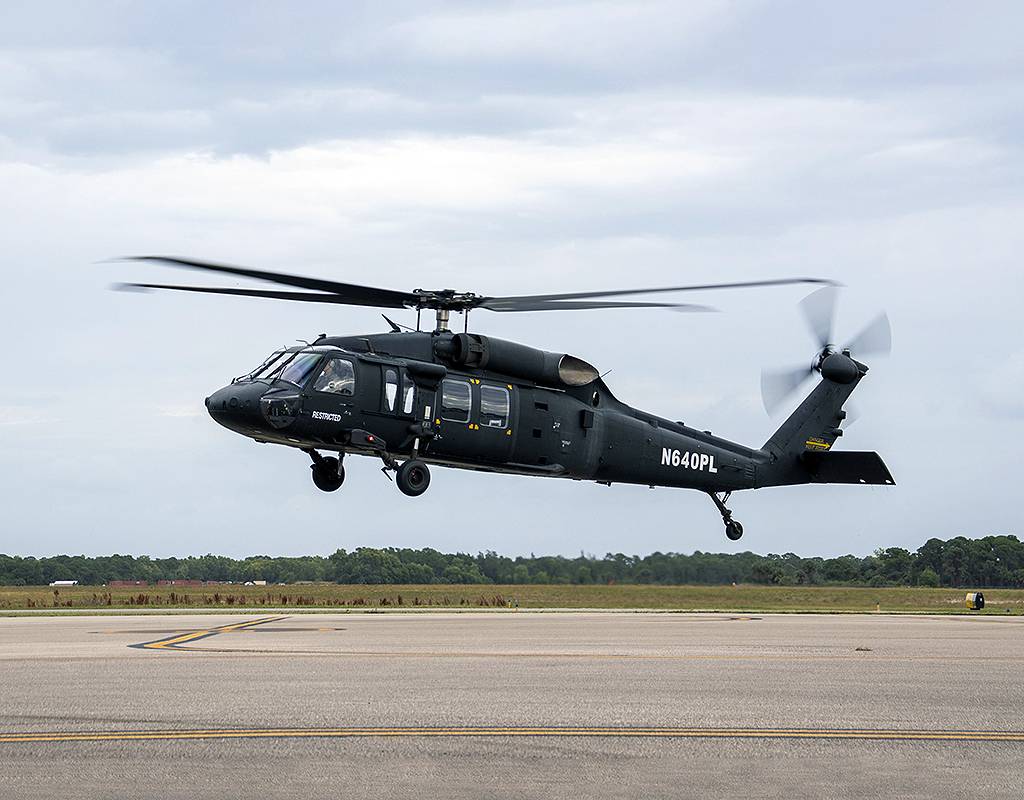 Sikorsky has obtained a restricted category special airworthiness certificate for its new S-70M Black Hawk, making the newest versions of the iconic military aircraft available to civil and commercial operators in the U.S.

California public utility San Diego Gas & Electric (SDG&E) took delivery of the first S-70M aircraft on November 18 at the Sikorsky Training Academy in Stuart, Florida, the same day that the FAA granted the special type certificate. While Sikorsky, owned by Lockheed Martin, slow played the rollout of the S-70M, making sure it checked all the necessary boxes with the FAA, SDG&E could hardly contain its excitement, sharing a video of the new aircraft on Twitter.

SDG&E will modify the aircraft to the Firehawk configuration at United Rotorcraft, a division of Air Methods in Colorado. By 2023, the aircraft will be ready to drop water onto wildland fires with high accuracy from its 3,785-liter (1,000-US gallon) external tank. Another five S-70Ms are on order to United Rotorcraft for configuration as Firehawks to unnamed customers, according to Joe Palumbo, program director for Sikorsky’s Global Military Systems & Services division

“The cost per hour is a lot less with a brand-new aircraft,” Palumbo told Vertical in a recent interview. “Availability rates are much higher with a brand-new aircraft. Obsolescence of the older aircraft; it’s really hard to get parts. This is a gas and electric company that made a commitment that they have an aircraft available at all times. That’s one of the trades they made and just like LA County and Cal Fire, they decided to buy new instead of getting excess defense articles.”

United Rotorcraft carved out a successful niche for itself turning Black Hawks into Firehawks using new S-70is from Sikorsky, but none of those are type certified by the FAA. Firehawks belonging to Cal Fire, Los Angeles County Fire and other agencies are public aircraft operated with relatively little FAA oversight.

SDG&E already has two surplus Black Hawks, but was able to make the case for buying new because the S-70M will come straight from the factory with the capability and reliability of a brand-new aircraft.

“They recognized, from a performance perspective, using the data they have from their two current Black Hawks, they were able to put together a case and go before the board and their shareholders that says, ‘We’re going to be able to do more with this helicopter, because it is a better performer,” said Brian Barrett, Sikorsky’s S-70i Black Hawk platform manager.

Companies like Brown Helicopter and Coulson-Unical went with surplus military helicopter to build their fleets but were forced to buy dozens of excess Black Hawks to keep just a few flying. Most of the hulks they purchased were cannibalized for spare parts, Barrett said.

FAA certification, and the establishment of a pilot type rating, are expected to broaden the market for the military-designed helicopter by allowing civil and commercial operators in the United States to purchase new Black Hawk aircraft direct from the factory.

“With type certification, new production S-70M Black Hawk helicopters in the latest configuration are available to the U.S. commercial/civil market for the first time,” said Jason Lambert, vice president of Sikorsky Global Commercial & Military Systems. “Internationally, where the FAA restricted category is not widely accepted, we can now discuss with other civil aviation authorities the potential of validating the aircraft for challenging civil operations in their countries’ airspace.”

Sikorsky received a type certificate for the S-70M aircraft from the FAA in February 2019, and produced the first-of-type aircraft a year later. During 2020-21, Sikorsky proved the aircraft conformed to the type design, and assisted the FAA in establishing the new type rating.

“Once all the FAA hurdles were cleared … and what it did is put us in a position where we were able to actually put the restricted category ticket on the aircraft and it was able to depart Stuart, Florida, as the first restricted category S-70M ever,” Barret said. “Most of the hurdles were given to us when we were given the type certificate. We started that process in August of 2019.”

“If you have an aircraft that was manufactured by a U.S. company and was accepted by an armed force, it’s eligible to be certified under the restricted category,” Barret added. “Immediately below that, it has seven things that you are allowed to go do.”

Once certified in the restricted category, the aircraft still has operational limitations. It is not allowed to carry passengers, fly over urban areas without FAA permission, or fly in class B airspace near busy airports.

“It means you are limited as to how you can use the helicopter,” Barrett said. “When you petition them, they will tell you which ones of the things you have petitioned for you can do. In our case we petitioned for three and they accepted all three.”

The FAA certified the S-70M aircraft under Part 21 of the U.S. Code of Federal Regulations in the restricted category, basing its certification on the U.S. Army UH-60M Black Hawk helicopter. Sikorsky specifically requested approval for three special-purpose operations in the restricted category. They are agricultural operations, external cargo with the Black Hawk’s 9,000-pound (4,082-kilogram) external lift cargo hook, and forest and wildlife conservation, which includes aerial firefighting.

All new S-70M aircraft conforming to the new FAA special airworthiness certificate will be built at the Sikorsky plant in Mielec, Poland. Sikorsky plans to begin full-rate production of the S-70M in January. Like the S-70i aircraft, the S-70M is a third-generation Black Hawk helicopter featuring a digital cockpit, General Electric GE-701D engines, and wide-chord rotor blades for increased levels of safety, performance, maneuverability, and situational awareness.

Prior to the S-70M certification, the FAA’s process was for certifying surplus military aircraft for civil use, according to Barrett. Operators who needed an aircraft with the power and capability of a Black Hawk could buy one used from the U.S. or other government and then upgrade its avionics and other systems to suit its needs.

The restricted category, “by its very nature,” does not apply to reciprocity agreements the FAA has with other civil aviation authorities around the world, Barrett said. The FAA’s certification does give the S-70M a sort of pedigree from a recognized air worthiness authority on which other countries can base their own certifications, he said.

“We used that process that was meant for surplus aircraft and were able to get it amended, if you will, to help us certify a new aircraft,” Barrett said.