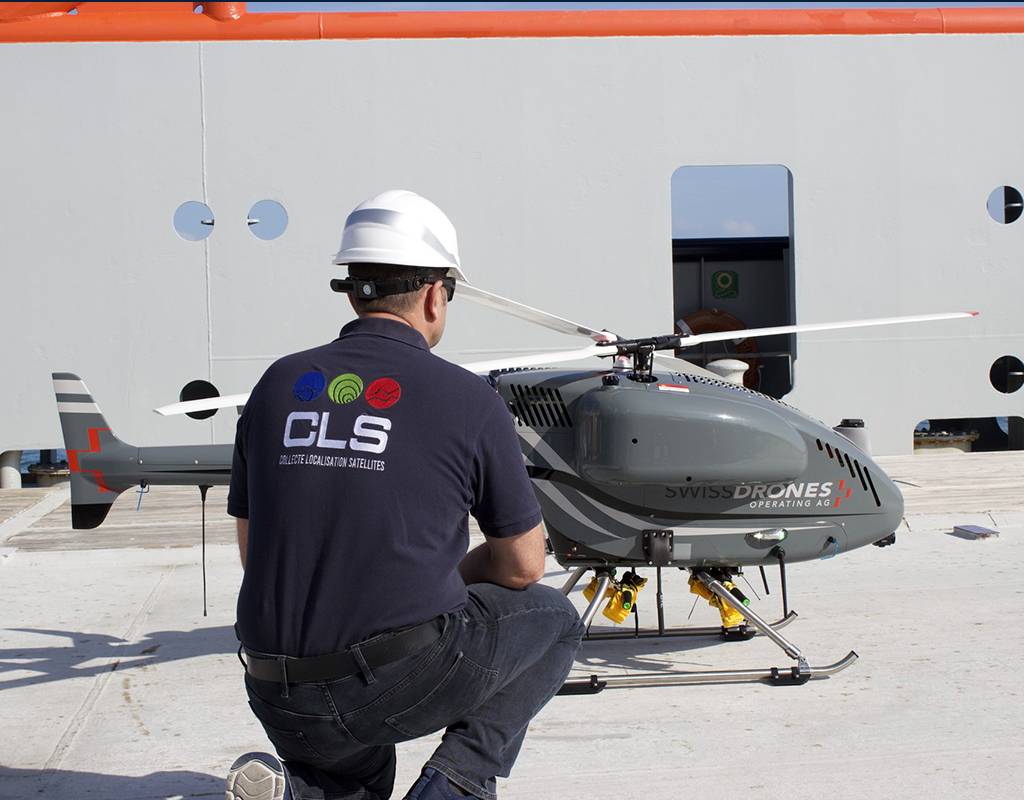 Vast, remote, and often subjected to dangerous conditions, the world’s oceans are fertile ground for a range of illicit activities. Because they are so difficult to monitor, pollution, human trafficking, smuggling, terrorism, illegal fishing, and piracy are all daily occurrences on the open sea.

SwissDrones, a company that develops, manufactures and operates long-range unmanned helicopter systems for commercial and public safety applications, and CLS, a pioneer in satellite-based monitoring and surveillance solutions, connecting from space SwissDrones UAVs, are bringing together the power of satellite data with the agility of unmanned aerial drones.

“CLS has been an expert in the field of maritime surveillance and security for more than 30 years, with no less than 400 satellites available to support national sovereignty and security at sea. CLS’s collaboration with SwissDrones adds a further stone to the decision-making tool available to maritime authorities. With this new UAV, we complete the arsenal of safety at sea that we offer. We are very happy to collaborate with Swissdrones. Together,  we ensure the reliability of our operations, which is a guarantee for the future,” said Nadia Maaref, director of maritime security at CLS.

“Drones are a complementary asset in the overall surveillance process,” adds Ulrich Amberg, CEO of SwissDrones. “They enhance maritime situational awareness with additional sources of data and make operations safer for coastal authorities during hazardous conditions.”

The two companies recently demonstrated how drones can play a vital role in such critical maritime operations as search and rescue, controlling fisheries, and monitoring pollution and ship emissions. The demonstration took place in the open ocean from aboard the Bourbon Offshore ship Argonaute and using the SwissDrones SDO 50 VTOL unmanned helicopter system. The SDO 50 was specifically chosen for this mission because of its long endurance, ease-of-use, low logistical footprint and ability to deploy in harsh weather conditions, all of which allow it to be easily operated from the deck of a maritime vessel.

According to CLS, the deployment demonstrated how remotely piloted aircraft systems (RPAS) such as the SwissDrones SDO 50 can complete Earth Observation Systems. The deployment also made a case for using drones as a complementary tool in the overall surveillance chain for monitoring oceans over extended periods and across large areas.

The deployment, which was done in collaboration with the French Navy, Bourbon Offshore, and the Direction Générale de l’Aviation Civile (DGAC), follows a previous deployment by SwissDrones and CLS completed in May 2021.

This press release was prepared and distributed by Flyby for Swiss Drones and CLS Group.