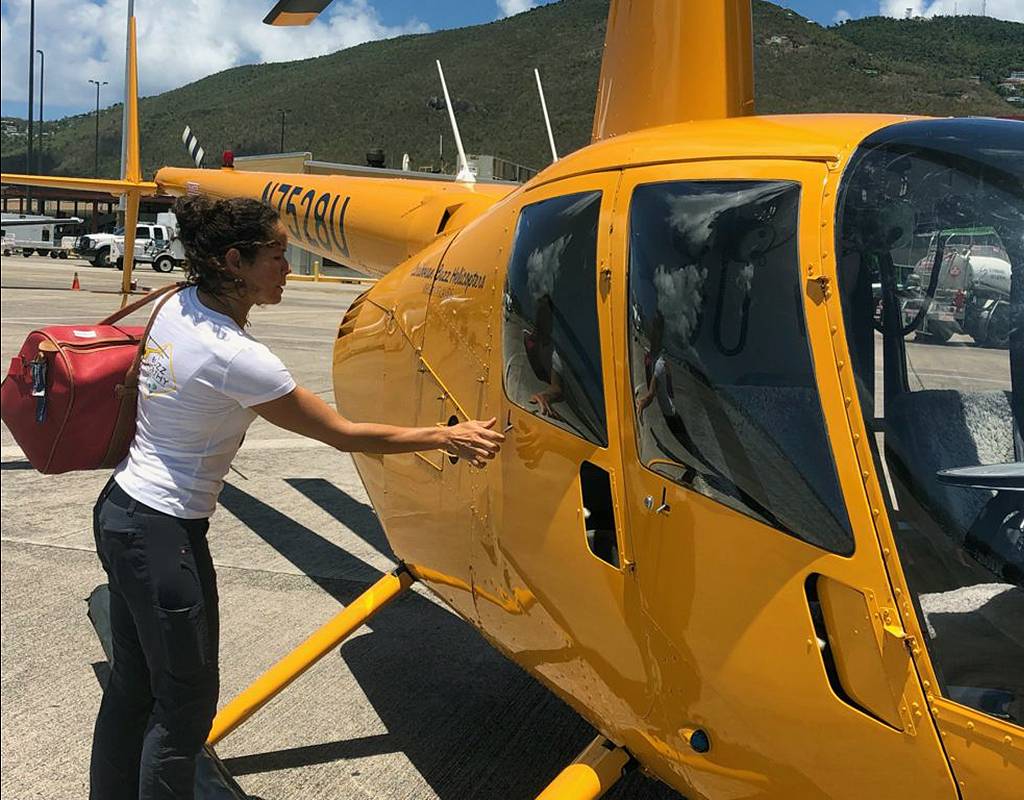 A helicopter carrying four people over the U.S. Virgin Islands crashed on Feb. 15, killing all on board including a well-known local pilot celebrated for flying humanitarian missions in the wake of two devastating 2017 hurricanes.

The silver-and-yellow Bell 206 was registered to St. Thomas-based sightseeing and charter outfit Caribbean Buzz Helicopters and piloted by owner Maria Rodriguez, who had two-and-a-half decades of flying experience and was well versed in the rugged Virgin Islands terrain.

Three members of a family who likewise called St. Thomas home were also killed in the crash, according to multiple sources. Why the helicopter crashed in deep vegetation atop one of the island’s steep volcanic mountains is unknown.

Local emergency officials received calls of heavy smoke from the area on Monday afternoon but took more than a day to hack through the thick hillside jungle where the wreckage was located.

The helicopter went down near the Preserve at Botany Bay resort community on the west end of the Caribbean island. Caribbean Buzz confirmed Rodriguez’s death and their ownership of the helicopter that crashed in a Feb. 18 Instagram post.

“Rodriguez was extensively familiar with the aircraft, area, and flight-related conditions,” Caribbean Buzz said in the prepared statement. “She is survived by her husband and two children.”

“We, at Caribbean Buzz Helicopters, are devastated by this accident and the subsequent loss of life,” the company said. “Extensive research will be needed to learn exactly what caused it. Right now, we are focused on supporting the families of those lost. Out of respect for the privacy of the family of the passengers on-board during the accident, we cannot provide any further details at this time.”

No less tragic is the loss of Tyler Yannone, a senior at the Antilles School on St. Thomas, and his parents Daniel Yannone and Neisha Zahn. The St. Thomas Reformed Church, where the family were members, confirmed their deaths in a post on Facebook.

The school also posted a message on Facebook mourning the loss of Yannone and explaining that both Rodriguez’s son and daughter graduated from the school.

“Our heartfelt thoughts and prayers are with each family member and loved one affected by this devastating loss,” the school said in a statement.

Rising precipitously from the shoreline, the U.S. Virgin Islands, like their British-owned neighbors, sport ridges of rainforest-covered rock that draw tourists and are part of the reason Caribbean Buzz did such a brisk business there. Navigating winding, often poorly maintained roads to resorts and private residences at their pinnacles can be hazardous and time consuming.

Relaying customers from Cyril E. King Airport on St. Thomas to homes in the Virgin Islands hills, or to remote, pristine beaches with no road access, Rodriguez came to know celebrities that frequented the Virgin Islands. She flew former U.S. President Barack Obama and family during a visit and counted country music superstar Kenny Chesney as a personal friend. Chesney was among the first to post an online tribute to his friend after the accident.

Rodriguez established Caribbean Buzz to fly passengers between the lush islands, many of which are otherwise accessible only by boat or ferry. Following the one-two punch of hurricanes Irma and Maria in 2017, she was for a time the only pilot able reach inhabitants of some of the worst-hit islands, like the coral atoll of Anegada in the B.V.I.s.

For her efforts, in which Rodriguez hiked from her home in the hills above Charlotte Amalie and began flying relief efforts of her own accord for days until more substantial resources could arrive, Helicopter Association International named her the 2018 Pilot of the Year.

Vertical Valor managing editor Dan Parsons and his wife flew with Rodriguez in April 2019 when the hills were still largely stripped of their leaf cover and houses still bore the trademark blue-tarp scars of tropical storm damage. Parsons profiled her in the May/June issue of Rotor and Wing International, of which he was then editor. At the time, Caribbean Buzz pilots could count 25,000 collective accident, incident and violation free flight hours.

“If you have an aircraft that can go where others can’t go, you have a responsibility when there’s an emergency, when there is some kind of a storm or something,” she said at the time. “It is a responsibility to us to make sure that our people and whoever we deal with are all OK.”

Investigations into the cause of the accident are underway by the Federal Aviation Administration and The National Transport Safety Board.