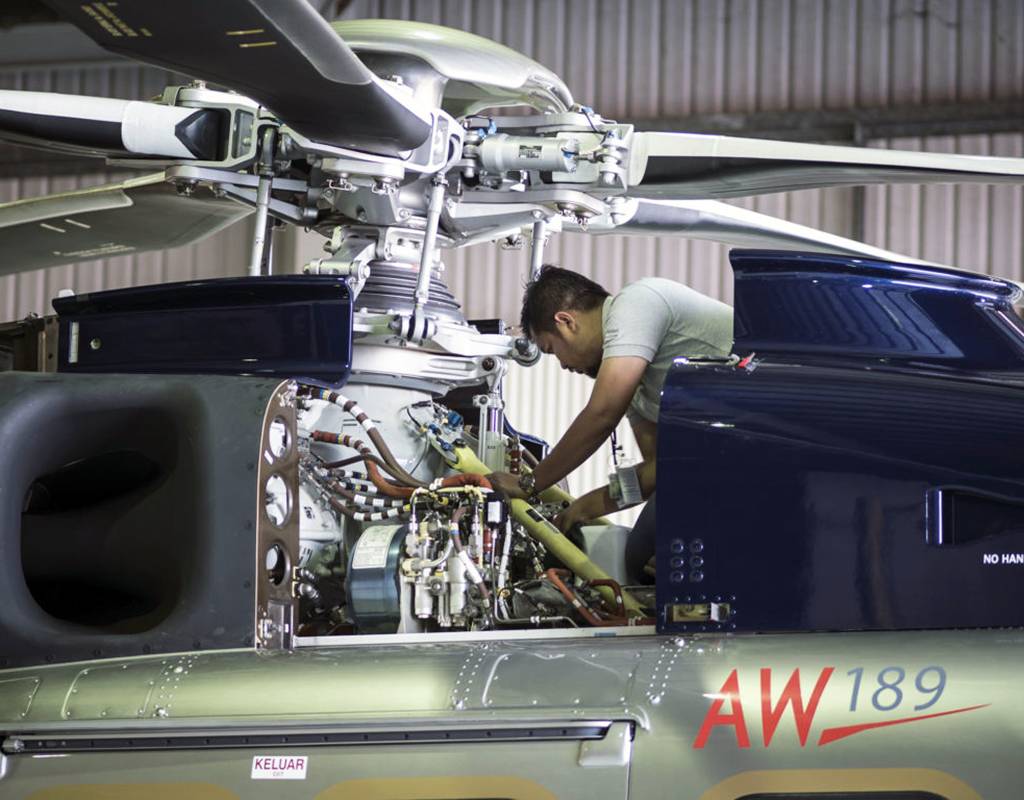 Leonardo’s helicopter division is developing a real-time transmission capability for all data produced by an aircraft’s avionics system, as it begins a far-reaching enhancement of its digital customer services.

Real-time data transmission is one of 26 digital initiatives in various stages of development as part of Leonardo’s Helicopter Advanced Services program, launched in 2019. The program aims to bring data to the core of Leonardo’s product development and services, using secure cloud-based solutions, smart data collection, and predictive maintenance to improve helicopter availability and streamline operations.

“This is the immediate concept where we think we will agree with our customers on how and why to share data,” Leonardo’s capability development manager Alberto Clocchiatti told Vertical.

The Helicopter Advanced Services program has the ultimate vision of providing the “helicopter as a service,” whereby aircraft — manned or unmanned — are always connected and monitored in real-time, with the OEM providing 24/7 support, artificial intelligence supporting routine activities, and enhanced mission planning is provided.

To allow this, Leonardo is working to improve its use of what  it describes as “enabling technologies” — such as virtual or augmented reality; the cloud, the internet of things; data analytics through artificial intelligence; and blockchain.

Leonardo’s digital roadmap to this point is built around the foundation of data collection and data sharing, and its core advanced analytics.

“We wanted to expand the number of our helicopters that share data with us and our customers’ data,” said Clocchiatti. “So, we have started with some initiatives relevant to what’s called in-service helicopter data collection. We are already collecting several thousands of giga data [points] through our diagnostic systems [Heliwise], relevant to the HUMS [health and usage monitoring systems] data analytics, expanding these capabilities in order to cover all kinds of data.”

On the aircraft, the company’s engineers are working to automate data sharing and enhance Leonardo’s digital data analytics.

On the ground, to improve and expand the capabilities of data transfer, Leonardo is working on Heliwise 2.0, which is designed to enable the transmission of flight data and OEM data from the aircraft’s avionics.

Automization at its heart

The data transmission program builds on Leonardo’s existing in-house HUMS and Heliwise diagnostic systems. With these capabilities, operators currently need to manually download the data through a memory stick or card and upload it to a server.

“We decided to invest in order to elevate the level of automization of this operation,” said Simone Gobbi, head of civil aircrafts avionic system engineering at Leonardo. “The automatization was including both the automatic download as soon as the aircraft sees a Wi-Fi network on the ground, and also we started to think about which other data has to be transmitted in-flight.”

To enable the transfer of data in-flight, Leonardo is developing its system to use either 4G or an operator’s own satcom channel.

The hardware for the capability is already in place. The Aircraft Mission and Management Computer (AMMC) in the AW169 and AW189 has access to a vast pool of information that it presents to the pilot through the primary and multifunction flight displays — the challenge has been working out a software update that would allow it to export that data.

Leonardo’s solution includes a “data transfer device” — another component that already exists in the aircraft. It is normally used to update the AMMC’s basic software, upload/download the FMS navigation database or mapping data, or update display systems, but with a software update it will be able to transmit data from the aircraft in real time during the flight.

The third and final component needed in the onboard architecture is a transceiver, such as a modem. Leonardo has been testing the system with modems from FlightCell and Skytrac, but Gobbi said Leonardo’s architecture is agnostic and would be able to work with any modem that can interface with its data transfer device.

He also stressed that the data will reach far beyond the boundaries of existing HUMS.

“I always underline the fact that we are not speaking just about HUMS, we are speaking about all OEM data that are produced within the avionics system that are available for all avionics systems,” he said.

The various reporting thresholds will be customizable, allowing for nuances in the different ways operators may be using their aircraft.

“Our intention is to enable the possibility for a customer to change the threshold of the parameters relevant to drive the maintenance of the system, according to the specific use they have,” said Gobbi. “We can even learn which is the right threshold and change it to when they are updating the service.”

Cybersecurity has also been top of mind in the development of the system, with Leonardo introducing the same level of encryption for in-flight transfer of data as it does for data transfer on the ground.

Clocchiatti said customer feedback is also helping inform the development of the system. “We are still doing several interviews with them in order to get all the requirements that we can catch in the market right now,” he said.

The AW189 will be the first type to be fully certified with the function, with Leonardo targeting regulatory approval by early 2021.

The modifications to the AMMC software have already been certified on the AW189 with the phase seven avionics software package, and in the AW169 will be shortly certified with phase six avionics software package. This just leaves certification of the data transfer device and modems (the Flightcell and Skytrac modems are already certified on the AW189 and AW169), which Gobbi said would require a straightforward test on the integration of the two components.

Ultimately, Leonardo plans to introduce the in-flight data transmission system into the AW139, too — but this may take a little longer to develop; its core avionics architecture is different to those of the AW169 and AW189.

Clocchiatti said operators across a range of sectors would be interested in the capability.

“The first customers really interested in advanced analytics were oil-and-gas, for sure, but we are confident that all the other operators will be interested,” he said. “Starting with EMS [emergency medical services], where we are pretty present all over the world. But also corporate/VIP customers who possibly have not yet considered the fact that we can provide additional services in terms of digital customer experience — we believe we can also provide value added services for them.”