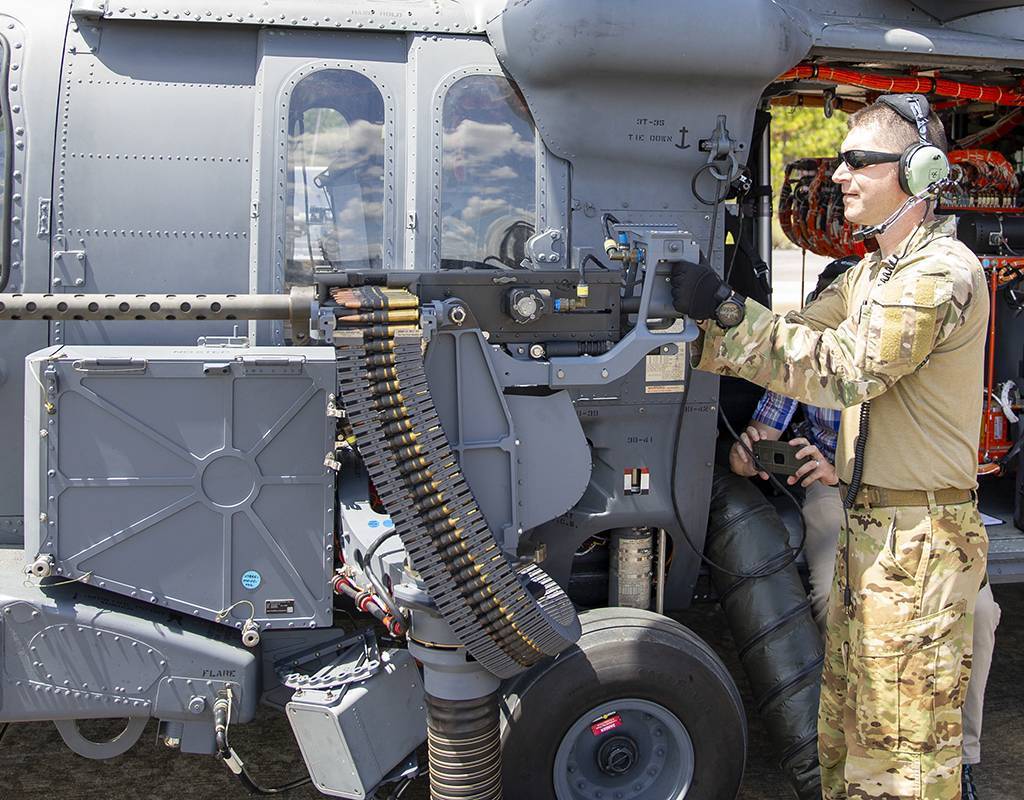 The goal of the ground testing was to verify the weapons systems functionality, accuracy, and to demonstrate the guns are safe to employ operationally. The 413th Flight Test Squadron testers and their partners performed the testing over a three-week period.

“It was great to see all the team’s planning and hard work finally pay off to get us to execution and gather this initial live-fire data,” said Maj. Christopher Hull, 413th FLTS chief test engineer.

The first HH-60W built, commonly referred to as Whiskey 1 within the unit, was used for the ground testing. Whiskey 1 contains specialized test instrumentation that allows aircraft manufacturer, Sikorsky, to monitor hundreds of parameters during the flights and envelope expansion testing. That specialized instrumentation allowed the testers to record the stress and strains in the aircraft caused by firing the weapons.

The helicopter’s guns can rotate independently providing an almost 360-degree firing arc. This created a unique challenge for the squadron’s engineers to develop test and safety plans not typically encountered with fixed-wing aircraft. Details such as blade rotation, human factors and instrumentation were examined and controlled for before the actual testing could begin according to Hull.

The Jolly Green’s aircrew not only operated the weapons, they were part of the evaluation as well. The crew wore special instrumentation that measured the weapon’s blast effects on their bodies. That data is part of a larger DOD study to better understand the effects of weapon blast on the human body, specifically as it relates to traumatic brain injury. The goal is to reduce injuries to service members who operate such weapons.

The ground testing phase is just the first step in the evaluation of the weapons. Data from the tests will be evaluated by the Air Force’s Non-Nuclear Munitions Safety Board, who will then clear the HH-60W for live fire flight testing. That testing is currently scheduled for later in 2020.

“It’s been a great privilege to see all the hard work and dedication the team demonstrated to get this far,” said Tech. Sgt. Lucas Spain, 413th FLTS’s HH-60 special mission aviator evaluator. “I have no doubt the team will continue to execute our test mission to the best of our abilities so Air Force Rescue can continue to live by our motto, ‘These Things We Do… That Others May Live.'”

The live-fire tests are just another of the many 2020 milestones for the HH-60W. So far, the Jolly Green II completed aerial refueling, radar, weather and defensive system testing to name a few.