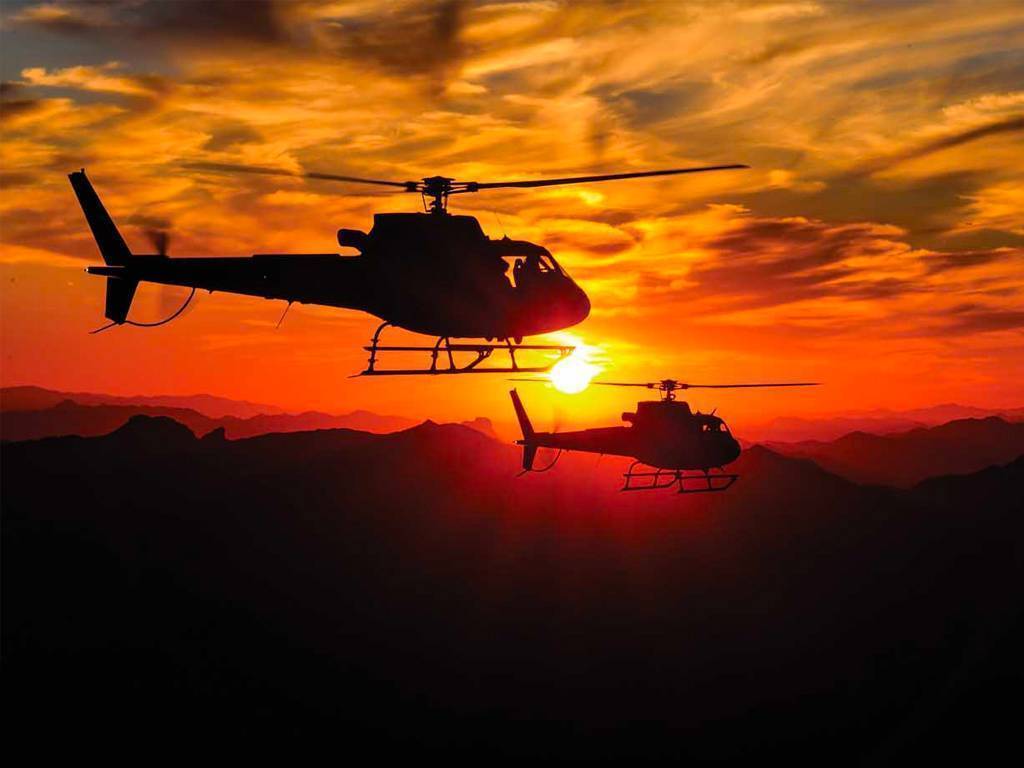 If you are involved in the North American civil helicopter industry, you almost certainly have a connection to Scott Urschel. Perhaps you know him personally, but if you don’t, then you probably know someone who does. You might have benefited from his work as a certification test pilot — for Airbus H125 inlet barrier filters and multiple night vision cockpits — or used a StartStick, the emergency start battery he co-developed. And if you’ve recently enjoyed a helicopter aerobatic display, it’s likely that Urschel, as the International Council of Airshows’ primary helicopter aerobatic competency evaluator, signed off the pilot.

Urschel has flown scores of aircraft models and an impressive range of missions during his more than 30 years and 10,000 flight hours in the aviation industry. Among other achievements, he is the only non-Bell test pilot to fly one of the company’s experimental flight test vehicles, and one of only a handful of pilots to be invited to fly the Airbus X3 high-speed demonstrator over 200 knots. But Urschel spends most of his time these days buying and selling helicopters — an ideal pursuit for someone with his extensive network of connections.

Urschel, however, is no mere broker. Through his Arizona-based company Pylon Aviation, he specializes in pairing high-net-worth clients with the right helicopter for their missions, then providing the training and mentoring they need to operate it safely. It’s a business that is very deliberately based on long-term relationships, even when that comes at the expense of short-term gains.

“I lose business to a number of customers when I give them my questionnaire and I ask them all the hard questions,” Urschel said, explaining that he starts by asking prospective clients how they plan to use their helicopter — and whether their budget can accommodate their intended missions. “The guy who wants to go to Alpine, Wyoming [elevation 5,637 feet] in a [Robinson] R22, well, it’s just not working. It’s not going to happen and it’s not safe and there’s not enough margin.”

Urschel’s customers are often the type of successful businesspeople who aren’t used to being contradicted, and they will typically react to his bluntness in one of two ways, he said. “Either they will totally respect you . . . or they’ll tell you to take a hike.” And that’s fine by him. Urschel has been in the business long enough to see too many people die in preventable accidents, and giving his customers the right aircraft and the right foundation is more important to him than simply making a sale.

“Helicopters are a wonderful thing, but they will kill you in a heartbeat and you have to have respect for them,” he said. As he explains to his clients, “You have personal limitations, and the aircraft has limitations, and then you have weather limitations, and any time you start exceeding any of those, you’re really putting yourself at risk. I always try to sell people margin, and the margin is in performance and training.”

Urschel, who grew up in the Phoenix area where he still lives today, has always been fascinated by helicopters. When he was around five years old, an uncle from Ohio who had a road-building company purchased a Hughes 300 and ferried it through Arizona. “My dad took me to Mesa Falcon Field, and I went for a ride,” he recollected. “I’ll never forget it because we took off and flew across the orchards on the west end of the runway there, and I remember trees going under the chin bubble. And I was hooked.”

As a teenager, Urschel befriended Roger Schuster, a sales rep for Hughes Helicopters who further encouraged his passion and introduced him to the business of buying and selling helicopters. Urschel jumped in with both feet. “I was doing real estate when I was 19 or 20 years old, and I made enough money to bamboozle the bank into loaning me money to by an R22,” he said. He leased the aircraft to a local flight school, Arizona Wing and Rotor, where in 1986 he learned to fly in it with his certified flight instructor (CFI) Neil Jones (now owner of Quantum Helicopters, and someone who has been a great friend and mentor to Urschel for over 30 years).

But simply flying his helicopter wasn’t enough for Urschel — he also wanted to be able to practice autorotations in it anytime. “Like most flight schools you needed to be a CFI to do autorotations on your own,” he recalled. The solution was simple: he became a CFI.

Not long afterwards, Urschel sold his R22 to finance a new business, Urschel Manufacturing, initially focused on making booms for barefoot waterskiing, another one of his pastimes. But he didn’t stop flying — or trading helicopters. By that point, Urschel had already become close to many key players in the Phoenix aviation and manufacturing scenes, and their mutual passions naturally led to a number of cooperative ventures.

Rusty Lyon, the founder of the shopping mall development company Westcor and the owner of Westcor Helicopters, had Urschel checked out in the Eurocopter (now Airbus) AS350 AStar, and rented it to him as a way of building turbine time. Soon Urschel had the opportunity to purchase a Hughes (later McDonnell Douglas and MD) 500, which he flew for a while, then sold in order to expand his manufacturing business. But he later bought another 500, which he restored in partnership with the MD mechanic Mike Collins, whom he also taught how to fly. Urschel used the 500 for miscellaneous operations including external
load work. He also outfitted it with electronic news gathering equipment, and it was flown for TV15 by one of his early instructors, Scott Bowerbank (who in 2007 was tragically killed in a mid-air collision over Phoenix while flying for TV3).

Meanwhile, Urschel had also been doing manufacturing work for his friend Mike Dillon, the owner of the ammunition reloading equipment company Dillon Precision and an experienced pilot himself. Dillon decided to buy a Hughes 500 as well, and Urschel taught Dillon’s sons, Chris and Steve, how to fly it. Leveraging their professional experience with firearms, they also equipped the helicopter with miniguns, and it was Dillon’s ongoing efforts to troubleshoot the unreliable miniguns that led to his development of the enormously successful Dillon M134D, which is today used by armed forces around the world.

An enthusiastic collector, Dillon soon added a Bell UH-1H Huey to his fleet, and some Beechcraft T-34 trainers. Urschel did not yet have his airplane rating, although as a certificated helicopter pilot, he only needed 15 hours of flight time for an add-on. Dillon provided him not only with time in the aircraft, but also an extraordinary instructor — Ralph “Slick” Aguirre, who had flown Hueys in Vietnam before transitioning to the Air Force and becoming a renowned fighter pilot.

“Mike thought it would be entertaining to give me the required 15 hours in the aircraft and send me somewhere to get a checkride,” Urschel recalled. “So I show up in this warbird with 15 whopping hours of airplane experience, and the DPE [designated pilot examiner] . . . goes, ‘Man, OK, I’ll do it, but I’m not sure about this.’ ” Urschel passed the checkride, and is now an accomplished warbird pilot, too.

Another key mentor for Urschel was Rich Lee, the Hughes (later McDonnell Douglas, then Boeing) test pilot who is also one of the pioneers of helicopter aerobatics. Lee introduced Urschel to aerobatics in the MD 500, and then trained him in the MD 520N NOTAR helicopter for the United States’ first — and so far only — helicopter pylon air race in 1995. That led to Urschel’s unique distinction of being the first pilot approved by the Federal Aviation Administration (FAA) for helicopter pylon air racing.

Today, Urschel, who performs aerobatics in his own MBB Bo.105, is one of six FAA aerobatic helicopter pilots and one of only four aerobatic competency evaluators qualified to evaluate helicopter pilots. He is currently developing a flight test instrumentation package specifically for helicopter aerobatic flying to increase knowledge and safety.

The importance of mentors

Urschel has a 16-year-old son, Caden, who soloed both a Robinson R44 and an Aeronca 7AC Champ on his birthday earlier this year. Caden would often tag along with his father on ferry flights, laying the groundwork for his own precocious accomplishments.

If Urschel’s extraordinarily diverse piloting career can be distilled to a simple philosophy, it is the importance of mentorship. Urschel is quick to credit his own mentors, who provided him with the opportunities and guidance he needed to develop his skillset safely. Now, he is doing his best to impart that philosophy not only to his son, but also to anyone who buys a helicopter from him.

Summing up his advice for private owners, he said, “I think that you need to be really serious about it, and you need to be able to devote the time to training . . . and that needs to be vetted by someone with credentials. [You need to] have a mentor, whoever that may be, someone that is very qualified, that can gradually expand your envelope of where you’re going to take the helicopter and what you’re going to do with it.” In addition to providing that service himself, Urschel contracts with a handful of trusted pilots who can fly with new owners until they’re safe and confident in their aircraft.

This is not just a good idea — increasingly, it’s becoming a necessity. Urschel said that recent accidents in the civil helicopter industry have caused insurance underwriters to tighten their requirements, or even pull out of the market altogether. “The insurance industry is in a real turmoil right now,” he pointed out. “We’ve had an excessive amount of accidents and there are so many more private operators today that the real stop block [to private helicopter ownership] isn’t buying the machine; it’s insurance.” For some low-time private helicopter pilots, guaranteeing a mentor pilot in the left seat for their first 50 or 100 flight hours could be their only viable route to ownership.

Urschel has thought about expanding Pylon Aviation, and has access to the capital he would need to do so. But he’s wary of losing the personal touch that has defined the business, and made it a success. “Pylon Aviation is me,” he explained. “I’ve had a lot of [people] say, ‘Why don’t you hire a guy to go ferry the helicopter with your new customer?’ But that’s how I build relationships.”

For Urschel, those connections aren’t just key to making a sale; they’re what he enjoys most about what he does. When he looks back over his long and varied career — from racing helicopters around pylons to buying and selling them — it’s not the aircraft that stand out, but the people he’s met along the way, many of whom have become lifelong friends.

“The helicopter is quite an amazing machine, [but] for me one of the coolest things is the relationships,” he said. “I think that’s the best part about my business, is the people I meet and the relationships that I’ve built.”