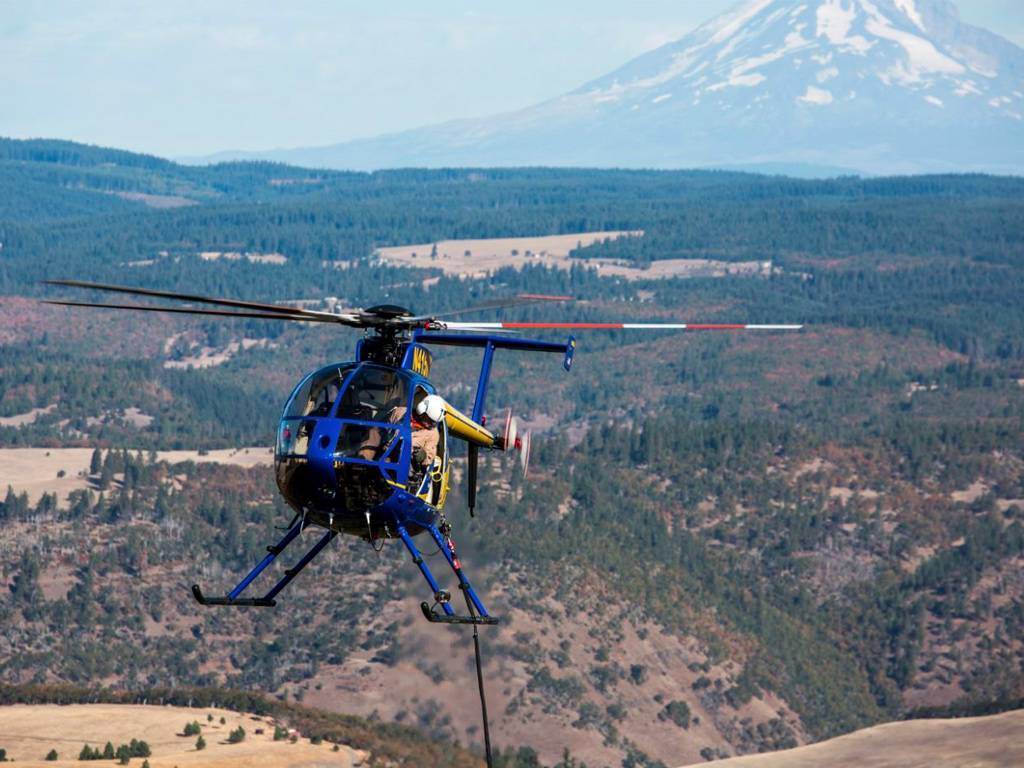 Earlier this month on the afternoon of Aug. 1, a horrible accident occurred along a stretch of rural highway in the Minnesota Northwoods. Reportedly, a pickup truck was being driven south on Highway 65, north of the tiny community of Nashwauk, when it drifted from its lane and onto the gravel shoulder. The vehicle struck from behind a 16-year-old girl pushing her two-year-old nephew in a stroller. The pickup truck fled the scene, leaving behind the critically injured victims.

Ten miles away at a remote job site, Jon Gannon was working as a general foreman for Wilson Construction Company on a large construction project. Based in Canby, Oregon, Wilson specializes in construction of electric utility infrastructure. On this day, the company was on a long-term project with Wisconsin-based Hooper Corporation building a 500-kV power transmission line for Minnesota Power. Due to the remote and heavily wooded setting of the project, Gannon was utilizing two company-owned MD 500E helicopters for support.

Shortly before 1:30 p.m., Gannon received a telephone call from his wife. She was in Nashwauk and had become uneasy after hearing the sirens of emergency vehicles seemingly headed up the highway in the direction of her husband’s work site. After Gannon assured his wife that he and the crew were safe, he received another call. This one was from Kyle Larson, construction manager for Minnesota Power, who was one of the first to have come across the awful scene on the highway.

Larson said it appeared to be a hit-and-run. He had performed CPR on the young boy and summoned additional help from another member of the Wilson crew: Brian Powers, a retired Oregon State Police officer. Larson asked Gannon if Wilson could provide a helicopter to aid in the search for the suspect vehicle. Without hesitation Gannon replied, “Heck yeah, we’ll get ’em going,” and then he himself began heading to the scene.

Gannon’s initial radio call was to his pilot Cabot Wolford, who was working nearby conducting external load operations. He advised Wolford of the situation and asked him to land, reconfigure, refuel, and get back into the air to begin searching. The only description they had was vague at best — a red pickup last seen southbound on Highway 65.

Wilson pilot Dave Durbano had been working on another portion of the project and just wrapped up when he heard the radio traffic regarding the hit-and-run. When Durbano advised he was landing for fuel, Gannon asked him to also join the search. Durbano enlisted the aid of Wilson apprentice lineman Aaron Peterson as an extra set of eyes in the aircraft. After refueling, the pair launched, heading south from the yard toward the scene.

Durbano recalled, “We flew along Highway 65 looking up and down the little back roads. As we were coming up to the scene I called Cabot, who was ahead of me and already searching. He told me he was on the west side [of Highway 65], flying grid patterns. So I said, ‘OK, I’ll take the east side and begin working south.'”

As the two helicopters reached the town of Nashwauk, they were provided with a bit more information. Witnesses told police the vehicle was a Dodge pickup and likely sustained damage to the exterior mirror on the right side.

By this time, both helicopters were in excess of 10 miles from the accident scene, and Durbano’s instincts from his previous career as a deputy sheriff were talking to him. He suspected they were likely well beyond an appropriate search area. “I told my partner, ‘You know, when I was a cop, I was always told suspects [fleeing a scene of a crime] typically don’t go far and usually turn to the right.” Applying that theory to this particular situation, Durbano decided to fly back to the scene and begin a more concentrated search, working south and west of Highway 65.

Their search pattern took them over a remote property off a small gravel road about five miles southwest of the accident scene. Durbano said it appeared to be a storage yard for scrap lumber. They took note of a handful of old vehicles scattered about, but their attention become focused on two vehicles that seemed out of place: a maroon-colored pickup and a tan van. There were also people standing alongside the vehicles.

Durbano recorded the coordinates and relayed them to Gannon. He and his partner then descended for a closer look. The crew’s suspicions were piqued when the people next to the vehicles appeared to ignore the low flying helicopter. As Durbano noted, “Normally if you’re flying at a low altitude people will wave or at least look up. These folks didn’t even make eye contact.”

As Durbano brought the helicopter into an out-of-ground-effect hover providing a better view of the vehicles, Peterson exclaimed, “Hey, that one truck is a Dodge and it’s missing the right mirror!”

The van followed the maroon pickup out of the yard, turning east toward Highway 65. Durbano turned the helicopter around and took to following the vehicles. Almost immediately, the vehicles stopped and the occupant of the pickup stepped out to have a brief conversation with the driver of the van.

When the vehicles began moving again, Durbano provided Gannon a turn-by-turn narrative as law enforcement closed in. “He turned south on Highway 65 so we’re radioing every turn and everything he was doing,” Durbano recalled. “I could see up the road a bit and there was, I think it was a Minnesota State Trooper, that had an oversized truck pulled over off the side of the road. But about that time I saw a sheriff’s vehicle coming northbound.”

Durbano’s radio report of the vehicle approaching officers was quickly relayed to the Itasca County Sheriff’s Office and the Minnesota State Troopers. As the sheriff’s vehicle and the pickup passed one another, the deputy sheriff made a U-turn and activated his emergency lights to initiate a stop on the pickup. After it was determined this was indeed the suspect vehicle, the driver was taken into custody.

The two-year-old boy was pronounced dead at the scene. His 16-year-old aunt was transported to the hospital with injuries that were significant but believed to be non-life-threatening. The driver of pickup was charged with several felony offenses including criminal vehicular homicide, hit-and-run, and driving under the influence of a controlled substance. Law enforcement officials declined to comment on the episode due to the ongoing investigation.

“I honestly didn’t think we’d find the guy,” Durbano told Vertical. “But once we got confirmation that was the vehicle and the driver, I was pretty ecstatic. It was like, wow, I can’t believe we actually found him. He could have been long gone. So it was a really good day.”

“The pilots did an amazing job,” said Larson. “Those MD 500s hit the air fast and they covered a lot of ground quick. It really showed who Wilson is as a company because they did it without asking any questions. It was selfless; they just went and did it.”

Looking back, Gannon said, “We definitely feel good. Everybody here was happy we could help. We all have kids and can’t imagine losing one regardless of age. But it’s nice that we can do something like that with the resources we have, that we can use them in a time of need. It was just kind of bittersweet. You were wanting to be all excited about catching that guy, but at the same time you knew what had happened.”